British yachtsman and Dream Yacht Charter brand ambassador Alex Thomson is busy this week preparing for his first ever Route de Rhum race, which sets sail from Saint-Malo in France on 4 November 2018. The successful sailor will be heading for Guadeloupe in the Caribbean onboard HUGO BOSS, his IMOCA 60 race boat, on which he sailed to a second place finish in the 2016-2017 round-the-world Vendée Globe race.

What is the Route de Rhum?

The Route du Rhum covers 3,542 nautical miles across the tricky wind systems of the Atlantic Ocean and takes place once every four years. This year, it will be celebrating its 40th anniversary. It is one of the offshore sailing calendars’ most high profile races, beginning in Saint-Malo, France and finishing in Pointe-à-Pitre, Guadeloupe.

The current record, set by French sailor Francois Garbart, is 12 days, 4 hours, 38 minutes and 55 seconds. If Alex goes on to successfully beat this time, he will stand in a favourable position to win the 2020-2021 edition of the Vendée Globe.

A sprint to the finish line

Alex said: “The Route du Rhum is, of course, one of the most famous French offshore races but one which I’ve never taken on before so I’m looking forward to testing myself. It’s been almost a year since our last race so I’m excited to get back on the water.

“This race is a sprint to the finish line and I think, with the right weather conditions, the foiling IMOCAS have a good chance of breaking the existing record. We’ve dedicated the time leading up to the race to train hard and we’ve done all we can to make sure that HUGO BOSS is in the best possible shape when she takes to the start line. As a team, we’re feeling confident and ready for the challenge.”

Alex’s relationship with Dream Yacht Charter began in 2015 and he has since supported the brand with a number of projects. Heis a patron of our new charity partner, Oarsome Chance, a charity that supports those struggling in mainstream education to gain qualifications through apprenticeships in the nautical world.

You can keep track of Alex’s progress on the Route de Rhum website and can show him your support by tweeting and including #sailthedream. We wish Alex the best of luck and look forward to seeing him on his completion of the race – hopefully as the winner! 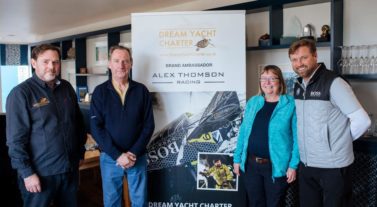 How it feels to sail with British sailing champion Alex Thomson

We were overwhelmed with the number of entrants to our recent competition to win a dream experience sailing with British sailing champion Alex Thomson on his racing yacht, HUGO BOSS. Our Competition Winner The lucky winner was Ali McGuckin, an IT consultant from Lydbrook, Gloucester. Ali took her husband, Andy to Port Hamble to meet … Continued